THE audience in the hall watched intently as a young girl took centrestage to describe how it feels to be a victim of abuse.

Isha’s voice broke as she sought comfort from a bedraggled doll that she held tightly in her hands. “I feel sad, dirty and useless. But it’s okay, because now you are with me.”

“Isha” is a young girl who was raped by her boyfriend, and she is played by 15-year-old Fara, a young student with Yayasan Chow Kit (YCK), a 24/7 crisis and activity centre that also provides educational programmes for at-risk children.

Fara was part of the team of homeschool students who produced 7 Voices, a theatre show highlighting child abuse. The show, which took place last weekend, was mostly produced by the children themselves.

Isha’s scene began with her watching a video of actress Lisa Surihani speaking to a 14-year-old girl who was raped by a man she befriended online. The video, which was produced by R.AGE as part of its Predator In My Phone documentary series on child sexual grooming, ended with the girl saying that she had become pregnant.

To Fara, Isha’s story is nothing new. She knows others who have experienced that kind of abuse, but it was still a very emotional process to understand the character and bring her to life on stage.

“I wanted to cry after watching the video especially since I knew it was a true story,” said Fara. “That’s why the theatre show was important – so adults can understand how children feel when they are abused.” 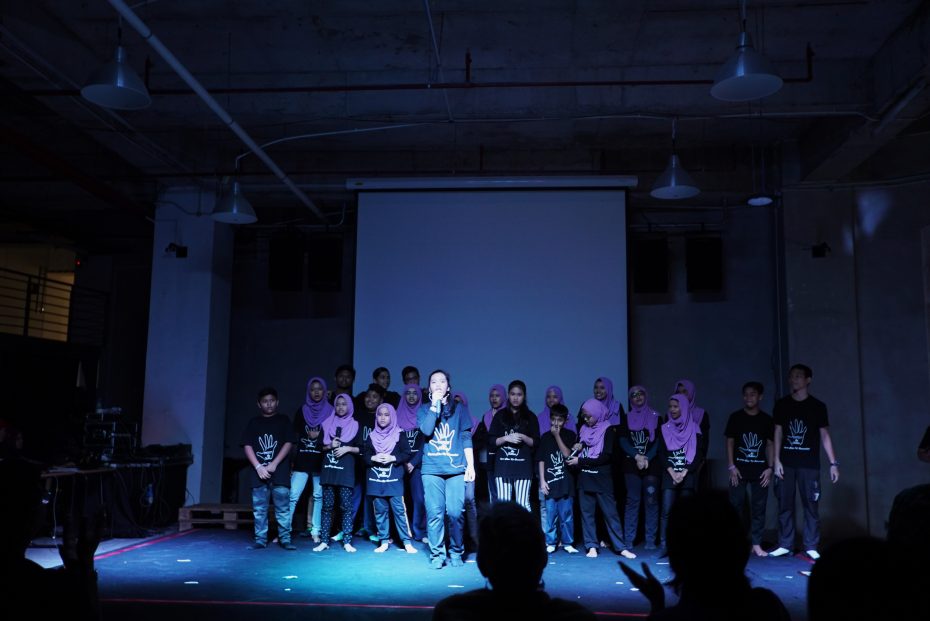 The young actors of 7 Voices put themselves in the shoes of the abused victims in their respective stories in order to convey their emotions. — KARMEN LEE/R.AGE

Isha’s story was just one of the seven mini-stories, inspired by true events that happened to some young residents of YCK. Each story featured a main character who had been abused by family members or friends.

Young as they may be, the main actors drew from their friends’ experiences in order to get into character. To 17-year-old Ardian, who played Azim, a boy who was sexually abused and neglected, it was especially heartbreaking because he knew that the story was based on a friend of his.

But Ardian also had his own experience of abuse he could draw upon to breathe life into the character.

“When the child’s rights to safety, health, education and love aren’t given, then it is also a form of abuse,” he said. “So before this, I was abused because I wanted to go to school, but couldn’t.”

He also said that a key theme of his scene was loneliness. “I’ve encountered it myself. There were times when I went home and there was no one there,” he said.

“It’s lonely and depressing when nobody is around when you need them. I’m lucky to have a family, but every night I think about my friends who have no family, and that makes me sad.”

Behind-the-scenes as the children rehearse for 7 Voices.

While preparing for the show, the team discovered that some of the kids had also experienced abuse.

“We taught them about the different forms of abuse, and a social worker had to step in to talk to some of the kids who realised that they had been abused,” shared Mathavi Nadarajah, a teacher at YCK.

Mathavi, who supervised the entire production, said while the show was a success as the children only had 10 days to rehearse, it was equally important to give the children an opportunity to talk about abuse from their perspectives.

“Sometimes, what the child feels is abuse is not seen as abuse in the eyes of an adult,” she said. “Recently, there have been many campaigns or conferences on child abuse, but most of the time these campaigns were very much focused on the perspective of the adults. “We wanted to focus on how the children would feel when they were abused, and bring the message to the audience that there are certain scenarios that children are not comfortable with, even if it’s okay in the eyes of the adult.”

For the children involved in 7 Voices, the message that they wanted to share is much simpler.

“We just want the audience to understand that when a child is sad because he was abused, it isn’t an act,” said Ardian. “We didn’t talk about the solutions to child abuse, but we want people to think about how they can prevent it.”

Empowering the children of Chow Kit

A new video series spotlights the new Chow Kit and what it means to the at-risk children growing up there. R.AGE speaks to the Special Representative of the United Nations Secretary-General on Violence against Children.

Sexual abuse survivors have been sharing their stories, hoping it will help others who are going through what they did.