Walking hand in hand with her husband on Teluk Cempedak beach, Kuantan, Ethelin Teo’s smile reveals none of the pain she has lived through.

When the Japanese attacked Kuantan during World War II, she was only 13.

“I looked up and saw a Japanese plane with the flag, the sun symbol,” she recalled. “My grandmother was so frightened she lost her mind a bit. She was holding a bottle of Tiger Balm, and she just started eating it!”

After seeing the planes, Teo’s family fled to the relative safety of a rubber estate. “All we had were bundles of clothes when we ran.”

They took shelter for a while at a farmer’s house away from Kuantan town, where the family slept on the mud floor. Even then, the family decided it was safer to live in the jungle.

“The Japanese came out to the estates, so we hid in the jungle until someone told us it was safe, then we returned to the farmer’s house,” she said. Teo pictured during the shoot at Teluk Cempedak. She said going back there reminds her of all the friends who’ve passed away.

After the initial invasion, Teo’s father cycled into town to see how things were and the stories he brought back were horrific.

The British soldiers were lying dead all around town, the bodies scattered and broken up.

Teo was recounting her story for an episode of The Last Survivors, an online video series on Malaysia’s WWII survivors to commemorate the 70th anniversary of Japan’s final surrender in Kuala Lumpur.

Though the memories were painful, she hopes the series can help remind young Malaysians of the horrors of war.

The retired nurse was born in Singapore, but returned to Kuantan when war broke out. She was forced to disguise herself as a boy, selling nyonya kuih or cookies her mother baked.

“My sister stayed indoors, hiding from the Japanese who were looking for gu niang (young girls). I looked like a boy at the time, so I dressed in my brother’s clothing so I could go out and run errands,” she said.

At night, she helped look after bicycles with her older brother at the local fun fair. “We charged 10 cents per bicycle,” said Teo.

“But there was one time I was putting on my boy’s clothing in the bush and a Japanese soldier stopped next to it to ask my brother for gu niang.”

Fortunately, the soldier lost patience and moved on.

Other women were not as lucky. Many were taken as “wives”.

One of these wives, who lived with a Japanese officer at the Hokkien association building on Jalan Bukit Ubi, sold rice to the townspeople. Most families were surviving on rations from the Japanese, which was just two milk tin’s worth of rice.

“She was very clever – she would burn the rice on purpose so she could sell it to us secretly behind her house.”

Teo said that the Japanese didn’t touch married women, so a lot of girls were married early.

“But there were some women, maybe prostitutes, who followed the Japanese willingly,” said Teo. 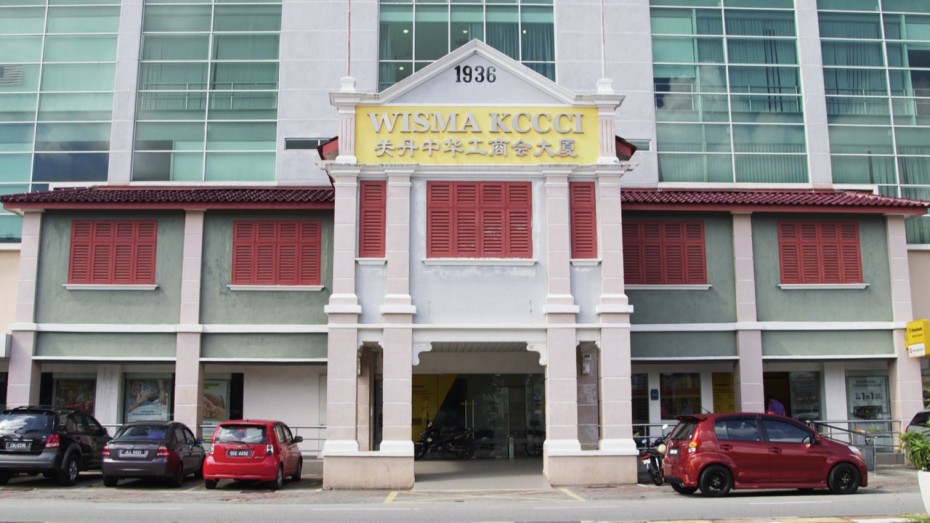 Down the road from the Hokkien Association was the old Chung Hwa school, which the Japanese used as one of their offices.

The school has since been turned into a bank, with a fresh coat of paint but the original facade intact.

“I remember a farmer being slapped repeatedly until he fell, because he forgot to bow to the Japanese guard in front of the school,” she said.

Teo heard stories from her father about the torture that went on within the school, and in front of the old police station.

My father’s friend had a pipe stuck down his throat and they pumped water in, before stepping on him. The water came out from every part of his body.

Thieves, however, were punished even more mercilessly to send a message to the people.

Teo said thieves were hanged to death in public, on a row of trees at Padang Majlis Perbandaran Kuantan (MPK).

“There was one body per tree. They were kept there for five nights, and their tongues would protrude very long.”

During the war, there were public trials at Padang MPK, where the crowd would point out who deserved to die.

“The trial really depended on the public. I never took part. There was a lady I knew, I think she was a detective. They said she deserved to die and that was it.” Now surrounded by food stalls, these two trees had bodies hung on them during the Occupation as a warning to would-be thieves.

The “traitors” would then be taken away in a truck to Teluk Cempedak, where they dug their own graves before being shot.

“Teluk Cempedak was surrounded by thick jungle back then, but the Kempeitai made a small path to the beach. That’s where they shot the ‘traitors’, beneath where the McDonald’s is today.”

Looking back, Ethelin said she was too young to feel anything.

“I was only 13. I was focused on helping everybody and surviving.”

Most of her friends from that time have passed away, and Teo said it saddens her how young people have so little knowledge about this important part of our history.

“The current generation never talk about the Japanese Occupation. They never ask; they never think about it.” 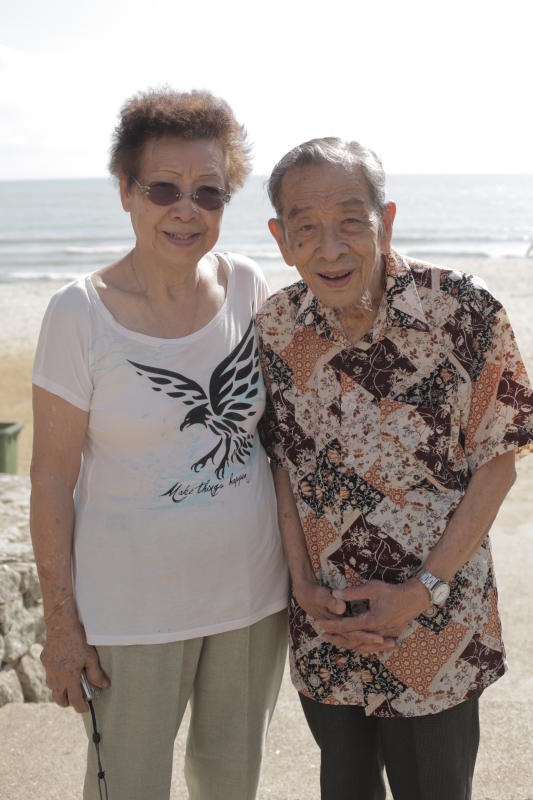 Ethelin Teo and her husband are all smiles as they pose at Teluk Cempedak beach.