THE Last Survivors is an interactive online documentary project that hopes to bring World War II stories back to life by speaking to survivors of the Japanese Occupation.

To film this series, R.AGE travelled to five states across the country, revealing the secrets and bloody backstories behind otherwise typical-looking buildings and locations before they are lost to Malaysia forever, but we can’t do it alone.

So we asked you, our readers, to submit short stories documenting what happened. These are our top picks.

CASEY LIU
My father was interned in the local police station for possesing a badge associated with the Kuomintang. My sister-in-law, who was still in her teens, cut her hair short, dressed like a man and took the enormous risk of looking for him at the police station.

He was eventually released after a few days, and he immediately searched the house for any other incriminating documents and souvenirs. These included all documents printed in English. All were consigned to the flames without exception.

That is how none of us 11 siblings possess birth certificates or any identity documents. The author’s sister-in-law Mdm Lam at her 80th birthday, together with family members in Sitiawan

JOHN ROBSON
I am 84 years old and I can recollect the day I witnessed the beheading of three Chinese people at the old Pavilion Theatre roundabout, directly below the police headquarters.

The Japanese Major, I think, pulled out his sword and asked the public to watch.

He went to the first Chinese, who was kneeling blindfolded with a white cloth, and with one swing he sliced the head off.

The body fell forward twitching and turning. It was a sight I can never forget till this very day. 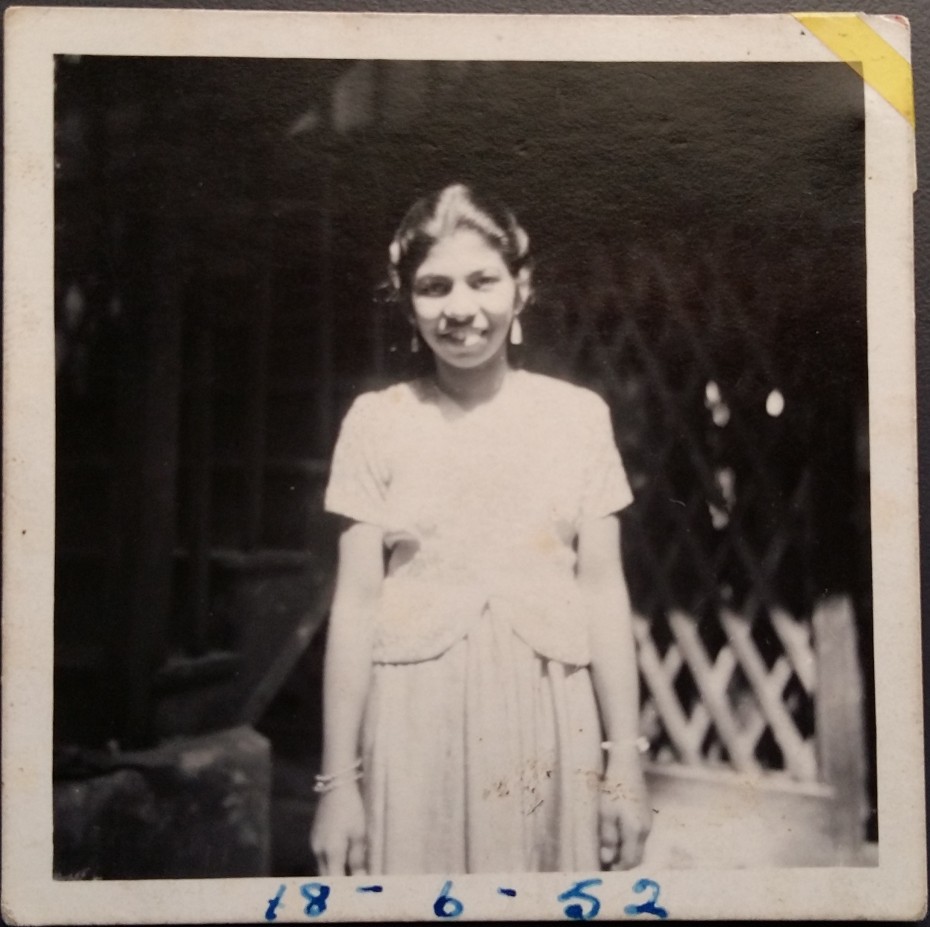 N Pushparani was 13 years old when the picture was taken.

One morning my mother wanted to make coffee but there were no matches to light the stove. My father had to go out to get matches from the shop. Pushparani’s mother standing at the staircase outside their home.

When he stepped out of the house, he saw a man in uniform with a gun in his hand, waiting at a junction 100 metres from our home.

He knew it would be unwise to backtrack, as it would raise suspicion, but my mother’s face paled at the sight because my father had to pass the soldier before he could get to the matches. She thought the soldier had a shoot on sight order.

My grandmother, being a typical China woman, still had children in China and sent all her savings back to China, leaving them poor here.

MELISSA YEW
My mother was around 10 to 15 years old when the Japanese came. At that time, her father passed away due to illness and my grandma had to work as a part time maid for several rich households.

She also made tofu to sell at the wet market.

My mum said they were so poor that they didn’t have rice to eat sometimes and would eat unsold tofu.

My grandmother, being a typical China woman, still had children in China and sent all her savings back to China, leaving them poor here.

HAN WEI MING
My aunt had difficulties getting food rations because she was short while everybody else towered over her.

She would hide under the bridge while trying to muffle my second aunt, who was crying, as the soldiers walked above.

Her neighbourhood friends hid guns in the atap roof and were eventually caught (a speculated double agent was involved).

“Ever since the day my mother received the call informing her of my father’s suicide, she would get panic attacks whenever the phone rang,” my grandma recalls.

CHOO XIN ER
My great grandfather ended up a victim of the occupation. An alleged local Japanese ally blindfolded and captured him, before taking him to an unknown location for one or two nights.

Whatever happened to my great grandfather on the fateful day would forever remain a mystery. Eventually, he was released unharmed, but a changed man.
Fear constantly gripped him, and he was depressed.

One day, he went to a friend’s house for the night – and was found to have hung himself in the kitchen the next morning.

“Ever since the day my mother received the call informing her of my father’s suicide, she would get panic attacks whenever the phone rang,” my grandma recalls.

Red pins are stories by R.AGE, yellow are stories contributed by readers. If you have a World War II story you’d like us to upload to this map, email us at alltherage@thestar.com.my along with the exact location of your story on Google Maps.

During the early stages of the Japanese Occupation, I was a young and naive schoolboy.

I was listening to the Voice of America “Double Ten” radio broadcast one night on October 10, 1942 when an armed Japanese soldier patrolling in the vicinity barged into the house on suspicion of the radio noise.

He checked all the rooms in the house except the room I was in with the radio. I was terrified, thinking of what would happen if they took me.

For more information or to watch episodes of The Last Survivor, visit rage.com.my/lastsurvivors.
If you know a WWII survivor, or a place of WWII significance in your city, please let us know with a short story, location and accompanying photo at alltherage@thestar.com.my.
If the stories are really good, we’ll even send our video crew to you and turn it into one of our Last Survivors documentaries.

Click on any pin on the map to read its World War II story. Red pins are stories by R.AGE, yellow are stories contributed by readers. If you have a World War II story you’d like us to upload to this map, email us (alltherage@thestar.com.my) along with the exact location of your story on Google Maps.
Pictures of locations from during the war or comparison pictures can also be emailed to us.
Video submissions are encouraged so get out there and talk to a survivor. Interesting stories and videos stand a chance to be filmed as an episode of The Last Survivors. Find out how you can help document the stories of Malaysia’s WWII survivors.

Behind-the-scenes photos from our Last Survivors shoots across the country.

Come February 2016, it will be 70 years since the final surrender of the Japanese army in Kuala Lumpur.Sadly, the...