IT’S probably safe to say that public and economic policy isn’t something most young people would be interested in. But with any luck, that’s about to change among young Malaysians.

The inaugural Youth Economic Forum (YEF) happening on Nov 12 is the brainchild of the Perdana Fellows, a group of some of Malaysia’s brightest young minds, selected to work as aides to government Ministers to increase youth engagement at the highest levels of government.

The forum will allow young people the unique opportunity to engage in dialogues with experts from government agencies, the World Bank, Bank Negara and major companies like Microsoft.

“We want to promote a general sense of awareness about the economy and how it affects them,” said Lee. “Things like tax revenue collected by the government and fiscal deficit, all these are important for young people to know.

She added that their peers can take up the opportunity to “reverse mentor” their speakers, who are long-term experts in their fields, by asking questions and encouraging discourse. 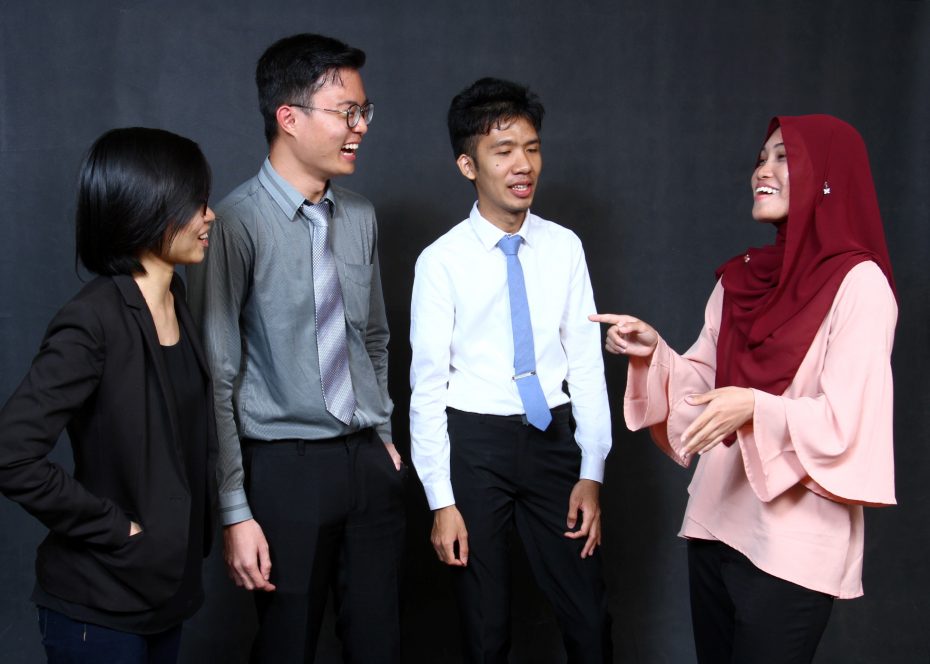 Chuah, Lee, Muadzzam and Azwa hope more of their peers will take an interest in economic and public policy. ― Photo: RAYMOND OOI/The Star

For a “youth forum”, the speakers aren’t exactly young, but Ngo said it doesn’t mean young people should shut themselves off just because of that.

“Before this, you’d probably think there’s no way for you to reach out to these experts, or that even if you could, they wouldn’t listen. But now the opportunity is there,” she added.

The YEF was inspired by the World Economic Forum (WEF), which started as a highly exclusive project before it expanded and became more accessible. Ngo explained that with YEF, they aim to reach out to the “regular youths” out there. And they are looking long-term.

After all, the benefits of having a platform for intellectual discussion is the mark of a developing society. The organisers hope the experience will stimulate the minds of young people and encourage them to think critically.

Nurul Azwa Mohd Rodzi recounted a similar experience when studying in Adelaide, Australia. She was frequently exposed to intellectual discourses at conferences and student council activities, which got her thinking about what was happening back home in Malaysia.

“After I returned, I knew I had to learn as much as I could, instead of believing everything on social media,” said the law student.

“I want to hear from both sides to understand a situation better before making my own conclusions.”

Sadly, she said many of her peers in Malaysia aren’t doing the same, preferring to talk about and share content on social media without thinking critically.

“Many of my friends only respond to something that directly affects them, or only when it’s viral,” said Azwa, 24. “And it’s always something to do with their own lifestyles.”

Chuah Hui Yin, 25, added that disinterest in matters of economy and public policy may cause young Malaysians to lose out on certain incentives provided by the government.

Chuah was eagerly following the announcement of the Budget 2017, but said many of her friends weren’t quite as interested.

“My friends, especially those who work in other fields such as medicine, think anything related to the national budget is complex and dry,” said Chuah, a Perdana Fellow to Second Minister of International Trade and Industry Datuk Seri Ong Ka Chuan.

“It is related to financial literacy to a certain extent, which they may lack. And they might miss out on certain incentives if they don’t learn about it quickly enough.” There are plenty of items on Budget 2017 that are relevant to young people. There’s a training scheme of fresh graduates, relief for PTPTN borrowers, first home buyers schemes, lifestyle tax reliefs on smartphone/computer purchases and gym memberships, and more.

Azwa believes part of the reason why young Malaysians don’t seem interested in such issues is the culture created by parents, teachers and even the government. They simply don’t take opinions from young people seriously.

“We’re so limited because we don’t train the younger generation to talk about their ideas,” said Azwa.

“In my university classes, students from other countries frequently speak up. They may sometimes give weird ideas, but they are so confident about it.”

“As for Asian students, they may be correct – but they are too scared to speak up.”

“We don’t get all these exposures to social issues in our school system, and it is a shame.” said Muadzzam Abdullah, a Perdana Fellow to Minister of Domestic Trade, Co-operatives and Consumerism Datuk Seri Hamzah Zainudin.

He related a particularly memorable debate topic he was presented with when studying at University of St. Andrews in Scotland two years ago: “This house believes Voldemort is misunderstood”.

“The topics at the debate club ranges from quite silly to serious matters,” said the 23-year-old. “But those experiences opened up my mind to the advantages of having discourse and freedom of speech as a young student.”

Lee suggested, “Instead of indulging in passive expressions like being a keyboard warrior, try other ways of expressing yourself and putting your ideas out.

“Ask more questions and get in touch with people in the government, don’t shy away from these kinds of discourse.”

Perdana Fellows share which areas Budget 2017 could have done better

1. More allocation for the environment
The word “environment” was only mentioned once during the Budget 2017 speech, something that environmentalists were quick to point out. On the other hand, the government did allocate RM400mil for “clean air and ecotourism initiatives” and another initiative to install solar panels in more than 1,600 housing units.

2. Reduce cost of Internet access
The Perdana Fellows praised the Government’s initiative to boost Internet connectivity and increase broadband speeds nationwide to 20MB per second, but said the cost for the average Malaysian to access the Internet is still too high.

3. Address car prices or improve public transport
Having a car is almost a necessity for urban Malaysian youth, just like Internet access. According to a recent study on iMoney, close to two-thirds of Malaysian millennials have a car loan. The Perdana Fellows said we need to take another look at the affordability of cars now, or increase the budget for public transport.

4. More affordable housing
Malaysia’s household debt stands at 89% of gross domestic product and continues to rise, which means there isn’t much room for young people to spend. The same study on iMoney showed unaffordable housing in the country to be the biggest financial worry for Malaysians aged 21 to 29, and it’s the second biggest concern for older Gen Y-ers. The Budget does allocate cheap housing for young people, but the current supply cannot keep up with the demand.

5. Not compromising on tertiary education
The budget for public universities suffered an almost 20% cut. The Perdana Fellows echoed academicians in saying that research and courses less oriented to market demand such as social sciences and languages will be the first to be affected. The universities may also have to resort to letting go of more qualified lecturers, or compromise on the school’s learning infrastructure.