In the small fishing village of Kampung Tengah located in Kijal, Terengganu, a local fisherman by the name of Ngoh, aged 68, sips on his teh tarik with a cigarette in his hand at a nearby warung.

As we sit across the table from him, Ngoh openly shares the story of his life as a fisherman and a family man, as far as he can remember.

Born into a family of fishers, Ngoh is a sixth-generation fisherman carrying on the family tradition. “My father, grandmother, grandfather – they were all in fishery.”

“Fishing has been carried down through my family and passed on to me,” Ngoh added.

A typical daily routine for Ngoh is working from early morning until evening. Ngoh completes two rounds a day by getting up at seven o’clock every morning for the first catch. He returns from the sea at two in the afternoon before going back to sea at six in the evening.

But not everyone is happy. As much as she wants him to continue doing what he loves, Ngoh’s wife worries about her husband out at sea. Once, he went on a fishing excursion to Pulau Tioman for two whole weeks.

“My wife got really upset about it and missed me a lot,” he recounted the story.

“She seriously questioned why I had chosen to be a fisherman.”

Her worries aren’t unjustified. Ngoh’s hard work comes with everyday dangers on the job, strong weather being one of them.

Ngoh rarely ventures out during heavy rain in Kampung Tengah, as there are less jetties. In the events of strong winds, fishermen would not be able to tie their boats down.

Instead, they travel to Kemaman, which provides more jetties to safely dock boats. 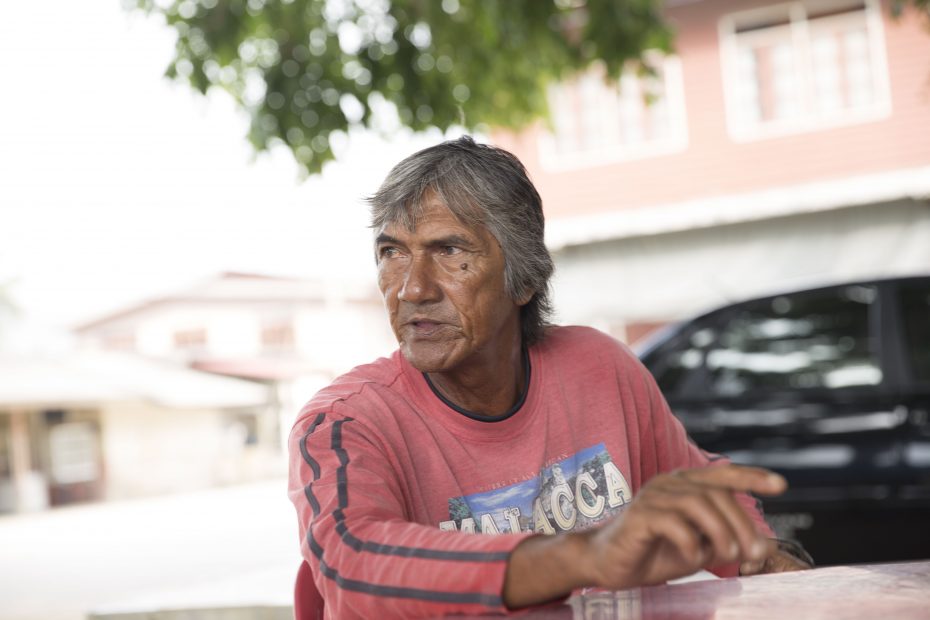 68 year old fisherman Ngoh, has been in the industry for at least the last twenty years and still enjoys his job day in, day out.

“Two of my friends were out sailing at the time. The waves were really dangerous,” he adds to his recalling. “Thankfully, they both managed to come back in time.”

But neither rain nor storm can keep the man from the ocean. He continues fishing even when sick, sometimes not by choice. He still needs to support his four children – one in Selangor, two in Shah Alam and another in Johor, all pursuing their studies.

“Fishermen are paid on the day itself, according to a day’s catch. We get paid when we return home.”

This is why Ngoh works even when he’s sick. If he doesn’t work for a day, he won’t get paid and will not have money for fuel and his living expenses.

“Anyway, the sickness usually goes away quickly,” he added.

But despite a six generational line of career, he isn’t keen on the idea of his children following in his footsteps.

“Everything is a lot more expensive now,” Ngoh explains. “For example, a ton of gasoline was RM15 long ago. Now, a ton is RM50 even with a government subsidy. However, our pay is still the same.”

“I want them to work other jobs aside from fishing,” Ngoh said. “Fishing is hard work and a difficult job.”

As for Ngoh, it’s hard to shake off a 20 year love for the ocean despite its drawbacks. He fishes for work, and after work, he fishes for leisure.

“I like going out to sea because all my old friends will be there, friends from Johor, from Kuala Pahang, even Selangor. We all meet out at sea, and we all return together.”

Even halfway through the interview, he begins to fidget.

“Are we almost done? My friends are waiting for me.”

Ngoh maked his way to the beach, towards a boat full to the brim with his friends waiting for him. As they set sail, Ngoh waves goodbye towards the bay.