by TEAM MAY LEE

In a small, unassuming wooden shack by the golden shores of Terengganu, hundreds of turtle eggs lie- the future of the threatened Green Turtle species. These green turtles, listed as vulnerable by the World Wide Fund for Nature (WWF) are tended to by Ragunathan Dato’ Kathirgamu, Fun and Adventure Manager at Resorts World Kijal, as well as his dedicated team of turtle guides, in Resorts World Kijal’s turtle conservatory.

Resorts World Kijal serves as a pioneer within the multitudes of hotels who now offer turtle- related services; it was one of the first resorts in Malaysia to open its very own turtle conservatory some 18 years ago, shares Ragunathan. Since then, other resorts have also ventured into the field of turtle conservation- with one key difference – only at Resorts World Kijal do the turtles lay their eggs on the beaches directly adjoining the hotel, Ragunathan explains.

The importance of this venture cannot be overstated. According to the WWF, out of 7 species of turtles, 3 are listed as vulnerable, with the rest classified as either endangered or critically endangered. 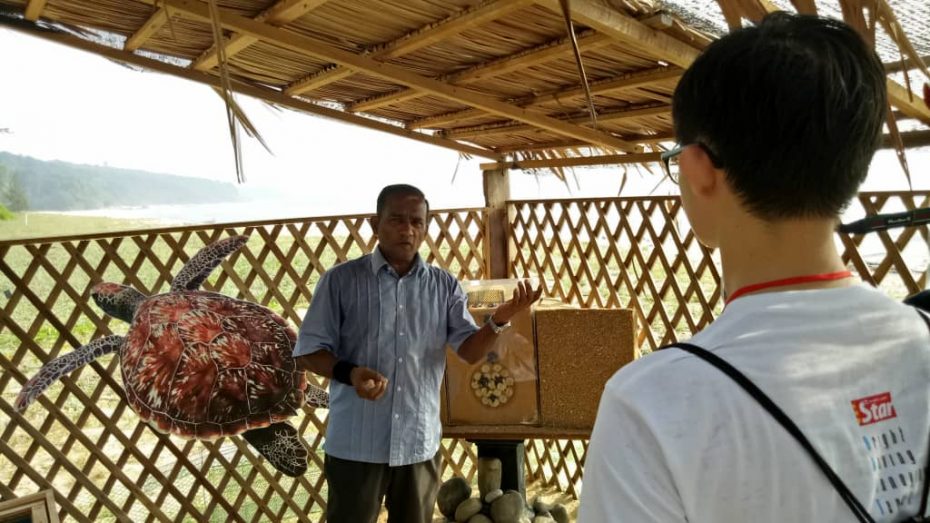 Resorts World Kijal’s turtle conservatory aims to generate awareness amongst the younger generation regarding the plight of the turtles.

So- why would a hotel venture into the field of turtle conservation?

“Firstly, it’s there at our doorstep. We can’t avoid that,” said Ragunathan. “We come and go, but the turtles always find their place of release. When you talk about Terengganu, you talk about turtles.”

Such is the pull factor of turtles- and Resort World Kijal’s turtle conservatory utilises this to full effect. Many Singaporeans come to Resorts World Kijal for the sole purpose of interacting with the turtles at the conservatory; some even call ahead to enquire, says Ragunathan.

However, turtle conservation is not without its challenges. Some turtles die when they emerge from the waters of the South China Sea to lay eggs. This is due to their mutilation at the hands of humans, especially in Terengganu, where some even needlessly gut them on occasion, due to misplaced belief in their medicinal uses, says Ragunathan.

Leatherback turtles, instantly recognisable by their large shell, no longer appear on the shores of Terengganu- not even at Rantau Abang, a beach famous for its turtle landings, he adds.

Some twenty to thirty years ago, Ragunathan says, leatherback landings there used to be plentiful; however, as the beach geared towards tourism, some tourists would sit on the shells of the turtles to take photos; opportunistic poachers collected turtle eggs in copious numbers to sell, decimating the leatherback population and leaving them virtually extinct from Malaysia’s shores.

To combat this, Resorts World Kijal works hand in hand with the Department of Fisheries to ensure that their conservation efforts are in accordance with international regulations. According to Ragunathan, “turtles are not like other animals which you can just buy or take from elsewhere,” which is why they strive to cooperate with the Department of Fisheries in this venture.

Of course, there are issues associated with a turtle conservatory being in such close proximity to a resort. Plastic bags and other forms of waste which are easily able to kill turtles if ingested are liable to be discarded into the sea, putting nearby turtles in danger.

To combat these issues, Ragunathan points out, the hotel fences the 7.6 kilometre long beach and posts guards who patrol the vicinity to prevent such occurrences. In addition, he continues, all of the hotel’s staff regularly spend time collecting ocean borne debris and other waste from the sands, reducing the risk of turtles being harmed in the process of them laying their eggs.

“Essentially,” Ragunathan adds, “we want to be very small and very personalised [to our customers]. We want to develop a culture of protecting, not selling. We want to create an awareness of turtle conservation, especially among the younger generation- we want to create social value for our guests.”

With over 800 turtles having landed on Resort World Kijal’s shores since the turtle conservatory’s inception, drawing the attention of thousands of tourists who flock to the resort,  the future of this threatened species seems just a little bit brighter.

“The whole point of this venture, Ragunathan concludes, “is that we want something that makes a statement about our efforts, objectives and our dreams.”

He then further mentioned the efforts the hotel has taken in ecological conservation such as forest restoration, which in turn revealed the hotel’s urgency for biodiversity cultivation. Over the course of 18 years, the hotel has turned its business into a hugely successful social enterprise; not once forgetting their responsibility to preserve and care for the environment.

When asked how he has sustained his passion, Ragunathan smiles enigmatically. “This experience looks simple,” he muses, “and it might not have dollar cent value; however, it is the experience of holding a newborn turtle, overlooking the turtles’ hatching and releasing them once grown which is absolutely priceless. It is why we are so dedicated to turtle conservation.”

“After all,”he adds with a smile and a twinkle in his eye, “when one thinks of Terengganu, one should think of turtles.”