I wasn’t a hip hop fan from the jump. As far as I can remember, my introduction to music came in the form of Nirvana, Hanson and Now That’s What I Call Music cassette tapes.

The first CD I had my hands on was Aqua’s Aquarium (in my defense, it was a birthday gift from an uncle). The first concert I ever attended? Savage Garden (shut up, I genuinely liked those guys). Weird times.

It wasn’t until I was 12 or 13 that hip hop music appeared on my radar by way of Eminem’s career-defining single, The Real Slim Shady.

At the time, I just thought it was funny that this white boy was taking shots at big name celebrities. Fred Durst, Christina Aguilera, Britney Spears, Will Smith… The list went on.

One week in, and I had memorised all the words. By the second week, I had a copy of Em’s Marshall Mathers LP blasting on repeat (IN MY PARENTS’ CAR. IMAGINE THE HORROR THEY HAD TO GO THROUGH!).

The music was bold, unique, and I was intrigued to say the least. Naturally, I wanted more.

So everyday after school I’d run home to download all the hip hop tracks I could possibly find on Napster (if you have no idea what Napster is, you’re too young). At dial-up speed, mind you. I recall printing all the lyrics out and storing them in this flimsy blue plastic folder just so I could rap and sing along to my favourite jams.

One time, a classmate caught me in my zone going over my lines, and told the whole classroom she noticed me talking to myself. Word spread and from that point onwards, everybody just assumed I had lost my noodles.

School was alright, but I’d say hip hop also contributed to my learning during those formative years.

For example, it helped me expand my vocabulary (you needed a dictionary to listen to Aesop Rock, trust me). And thanks to the undying commitment of some rappers to represent where they’re from, I was able to identify the five boroughs on the New York City map at a very young age – a valuable geography lesson indeed.

A lot of my peers viewed rap as nothing more than a bunch of random words strung together: “Oh, it’s just a bunch of guys talking on a beat”.

But I always thought it was much more complex than that. I listened to a rap song and I saw flow, imagery, wordplay, metaphors, ad libs and melodies. It’s an art form, first and foremost, whether you’d like to admit it or not.

Some 15-odd years later, and hip hop still sounds as fresh as ever. I still get excited over new artistes and releases. I still exclaim “OOOH!” whenever I hear a good line. I still commit my favorite lyrics to memory. The beats and rhymes resonate with me today the same way they did when I first discovered them.

Only difference is that with the Internet, hip hop culture is becoming more and more embedded in our lives and as a result, more people are familiarising themselves with it.

Hip hop has found its way into our daily conversations and hashtags (through slang terms and phrases popularised by rappers), guest verses on countless chart topping, record-breaking hits and million-dollar endorsement deals with giant brands.
I guess even the late Biggie never thought that hip hop would take it this far. Notorious B.I.G, aka Biggie, may have passed away in 1997, but the hip hop scene is still uber fresh.

Jin Hackman is a rap artiste and founder of hip hop collective Raising The Bar. Follow him on Twitter at @jiniusatwork. 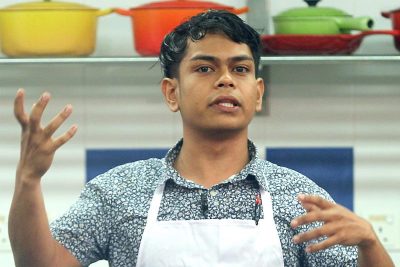