LAST year, the Anselm cheerleading team from SMK Infant Jesus Convent, Malacca were on the brink of disbanding. Cheerleading wasn’t a priority in the school, so despite an impressive fourth-place showing at CHEER 2015, the team feared it would be its last.

The team won the High School Junior All-Girl division, even though they were up against the mighty Rayvens, the five-time division champions from SM Sri Kuala Lumpur.

“Hopefully now the school will support our team, and we’ll be able to attract new members,” said coach Yusmyra Natasya. “They weren’t really supportive before because we had never won.”

Anselm’s story is a familiar one to many on the Malaysian cheerleading scene, which has been growing slowly but surely since it was first introduced to secondary schools at the very first CHEER event in 2000.

Unfortunately, many teams still struggle to gain recognition for their athletic achievements in the sport – even from their own schools.

Anselm’s journey to the CHEER Finals was almost cut short when all its senior members pulled out of the competition in order to focus on the SPM trial exams.

“We almost gave up on coming here, but thanks to our coach, we not only came, we managed to win!” said team captain Yap Chien Wen, 16, her voice barely audible over her team’s celebrations. Clearly, the sport means a lot to those involved. The Rayvens were heartbroken after their performance, where they missed a couple of their high-flying stunts.

“We managed to do a perfect routine just last Friday,” said captain Che Zhi May, 15. “But a teammate got injured and we had to make some changes to our routine.”

There was no such heartbreak for the Rayvens’ senior team, the Cyrens, who continued their domination of the sport by winning their seventh consecutive title in the Senior division.

The team put on another formidable display, which wowed the crowd at Tropicana City Mall, Petaling Jaya.

“My girls really deserve this win,” said Cyrens captain Cassandra Yang, 16. “We train four times a week throughout the year, so we also owe a lot to our parents for supporting us.”

This year, there was something extra to cheer for at the Finals – a brand-new university division.

The move was hailed by the cheerleaders, who used to have limited opportunities to compete after graduating from secondary school.

“I used to be in Zodiac (from SMK Kepong), and this new category gives me a chance to come back to CHEER,” said Puzzle captain Danny Liaw, 20, from Tunku Abdul Rahman University. “Having a university division gives the cheerleaders something to strive for after they leave school,” added Cheerleading Association and Register of Malaysia president, Beverly Hon.

“It drives the cheerleaders to improve, and gives them opportunities to see where they stand.”

The university division is also great for cheerleading fans, as it allows the teams to perform bigger stunts. The crowd certainly enjoyed it this year, so it’s safe to say the division will still be around at CHEER 2017. 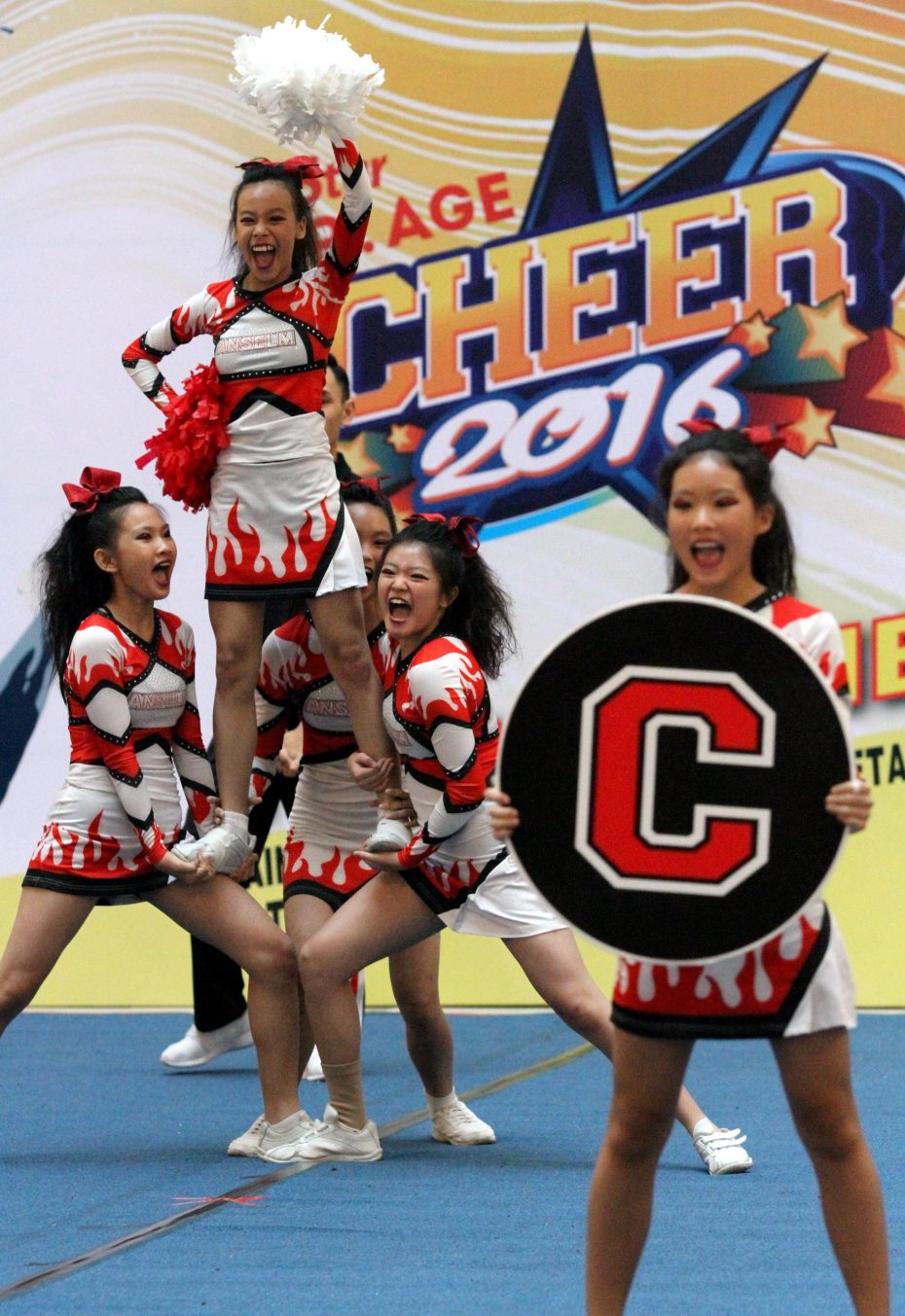 The Rayvens from Sri KL were the overwhelming favourites to win the Junior division, but underdogs Anselm obviously didn’t get the script.
Instead, they wrote their own. Last year, the team was on the brink of disbanding because they didn’t have enough support. Their senior members decided not to compete this year because they had SPM trials.
The junior members, however, were determined to show up. They signed up for the Junior category with a few new members to make up the numbers.
“I’ve been waiting for this moment since I was in Form One,” said captain Yap Chien Wen after receiving the champions’ trophy.
“I’m very proud of my girls. They spent countless hours practising, and we still can’t believe we’ve beaten the Rayvens!” Calyx Junior had to compete against division heavyweights like former champions Mickeymitez from SMK Damansara Jaya and Zodiac Co-Ed from SMK Kepong. However, they remained unfazed and performed a flawless routine.
“This is a dream come true! It has not been an easy journey to get here. This is the best thing that has ever happened to me,” said captain Julia How, 16.
“We’ve been working towards this for five years,” added coach Chiaki Chong. “There have been a lot of injuries recently, but they’ve impressed me with their determination.” The Cyrens were pre-tournament favourites for a good reason – they’ve won their division a record six consecutive years, and they’ve done it in fearsome style each time.
They’ve been training for CHEER 2016 since October last year, and coach Tan Yee Ming said their strength training sets them apart. “You can have all the technique in the world, but without strength, you can’t execute anything.”
New Cyrens captain Cassandra Yang, 16, was elated with the record-extending win.
“Who would’ve ever believed we could win seven times? I’m so proud of my girls, especially the new members who did so well,” said Yang. CHEER 2016 saw the introduction of a brand new university division, and judging by the quality of the performances, it is set to become a popular fixture in the annual tournament.
The team from Sunway University now holds the distinction of being the division’s first-ever winners.
“We’re honoured to be the first, and we’ll work hard to keep winning,” said captain Ling Xi Liang, 19, who is also part of the Cheer Aces All-Star team.
Liang used to compete at CHEER with the Vulcanz from SMK Seafield, and he believes the university division would boost the sport’s popularity even further.
“As for the cheerleaders, university-level competitions will help them with the transition into All-Star competitions, which is the highest level of cheerleading.”

CHEER 2016 was organised by R.AGE and supported by the Youth and Sports Ministry and Education Ministry. Grabcar was the official transportation partner. Watch the performances at fb.com.my/thestarRAGE!