The drama and excitement at the Garena Cyber Games shows just how fast the Malaysian eSports scene is growing. AS the word “victory” illuminated the screen and the crowd cheered wildly for them, the Kuala Lumpur Hunters (KLH) breathed a unified sigh of relief.

KLH had just successfully defended their title as the champions of The Legends Circuit Winter Finals Malaysia at the 2015 Garena Cyber Games. The win signified one thing – that they are still the best League of Legends (LoL) team in Malaysia.

As they lifted their trophy and a mock cheque for RM40,000 in the vast hall of the Mines International Exhibition and Convention Centre (MIECC), the six faces on stage bore a mixture of excitement, exhaustion and, oddly enough, indifference. Clearly, they were having mixed emotions going head-to-head with their former captain Jason “JaeYoong” Yoong. Yoong, who decided to leave the team after KLH lost at the Garena Premier League 2015 last August, was reunited with his old comrades on the battlefield – as a marksman for rival team Dulcet Essence.

“The loss was pretty disappointing but we’re going to put in more effort and time for the next split,” said Yoong. “This is the first time I played against my old team and it was fun. I wanted to see how much I could do after leaving KLH, but I’m happy to see how much they’ve grown.”

New KLH captain Poon Kok Sing, better known by his in-game name Ozora Veki, was even more happy to have gotten one over his predecessor.

“We went into the game wanting to beat him badly,” said Ozora Veki. “JaeYoong taught us a lot, and I’m thankful for that. But the win proves we are better as a team without him.”

This deep-seated rivalry and drama, however, can only be a good sign for the local eSports scene – the stakes are clearly getting higher, and just like any other spectator sport, the backstory of the games make it that much more entertaining for the fans.

And there are plenty of eSports fans in Malaysia. The two-day Garena Cyber Games saw close to 50,000 attendees showing up.

The event is one of the biggest gaming events in the country, and only the cream of the crop in the Garena community from Malaysia and Singapore get to fight it out for the top championship titles.

KLH has plenty of fans, obviously; but even as a relatively new team, Dulcet Essence has a loyal band of supporters. JaeYoong, in particular, has quite the following.

“I’m here just to support Dulcet Essence. I look up to Yoong and Xare because they have achieved so much in their careers,” said Faiz Idris, 18.

With two new tournaments brought to the big stage and a bigger prize pool on the line, Garena is upping the ante for gamers across the region. 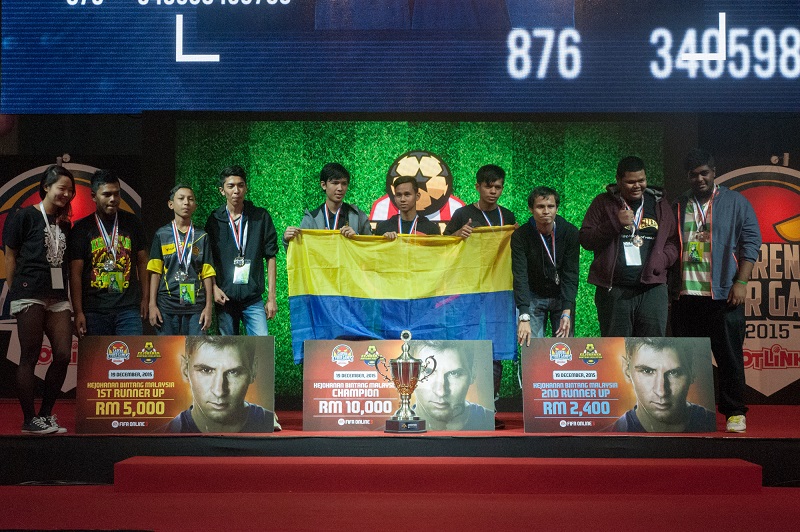 This year, the crowd saw the first ever state vs. state FIFA Online 3 tournament. The Perlis team took home the grand prize of RM10,000.

There was also excitement over Alliance of Valiant Arms (AVA), a new first-person shooter game recently acquired by Garena. With a grand prize of RM30,000, there was plenty to fight for at the Garena Cyber Games’ AVA tournament as well. Team Allegiance battled valiantly to emerge as champions. But even though there are already several “superstar” players in Malaysia and platforms like Garena Cyber Games are proof of how far the scene has come, there’s still plenty of room for growth.

Many of the gamers we spoke to still cast envious glances towards teams in other countries, where their talent would be much more appreciated, and developed.

But with teams like KLH and Dulcet Essence battling it out, it’s really the entire Malaysian eSports scene that wins.

R.AGE was the official media partner for the 2015 Garena Cyber Games. To watch videos of the games, go to rage.com.my/gcg.