IT’S not every day you get invited to the Prime Minister’s residence, so when our Predator In My Phone team was asked to attend a meeting there a few weeks ago, we didn’t really know what to expect.

We pretty much just knew that our undercover journalists, the brave young women who had posed as underage girls to investigate and film child sex predators, would be presenting our work to several key government Ministries and agencies.

The meeting was set up by two parties – the Government’s sexual crimes task force, headed by Datuk Seri Azalina Othman, and the founder of the Permata Programmes, Datin Seri Rosmah Mansor.

It was only when we got there that we realised the kind of firepower they had managed to assemble. We were speaking to representatives from the Ministry of Women, Family and Community Development, Ministry of Education, Ministry of Health, Malaysian Communications and Multimedia Commission, Permata Programmes and Prime Minister’s Office, among others.

RELATED: TACKLING ABUSE BY PEOPLE IN POSITIONS OF TRUST

Before that, our Predator team had been working mainly with the task force, the police’s Sexual, Women and Child Investigation Division (D11), various child protection NGOs, and several Members of Parliament to help push through new laws against child sexual crimes.

While most of those efforts were focused on lobbying change on the legislative front, particularly to push through the task force’s proposed Child Sexual Crimes Act, the meeting at Seri Perdana was about laying the foundations for getting the executive branch involved.

Our job that day was to show them what we’re all up against.

The R.AGE team was the first to present, and we showed them two videos – one on our undercover sting operations on child sex predators, and another showing a young rape survivor, telling her heartbreaking story to actress and Predator campaign ambassador Lisa Surihani. During the live launch of MPs Against Predators, Lisa called Khairy Jamaluddin to lobby for his support for laws against child sexual grooming.

By the time the meeting was over, the cause had taken another huge step forward. Everyone at the table committed to do whatever they could to help end child sexual crimes, starting with a national seminar on March 13-14, titled Jenayah Seksual Kanak-Kanak: Hentikan!!.

“When we introduce the Child Sexual Crimes Act, we must bring everything we have.

“If we don’t have the buy-in from all parties, what’s the point of having this great law? We have to make sure it is enforced effectively,” said Azalina.

In total, over a thousand people are expected to attend the seminar at Putra World Trade Centre, Kuala Lumpur, including concerned parents and members of the public who can register for a spot.

The seminar will start with plenary sessions, featuring experts and activists from around the world speaking about the many issues surrounding child sexual crimes today, and what’s being done in other countries to tackle them.

After the plenary sessions come the breakout discussions. Attendees will be divided into smaller groups based on their various backgrounds (e.g. educators, university students, parents, NGOs, government agencies, etc.). They will discuss the challenges their communities face in terms of child sexual crimes, and their proposed solutions. 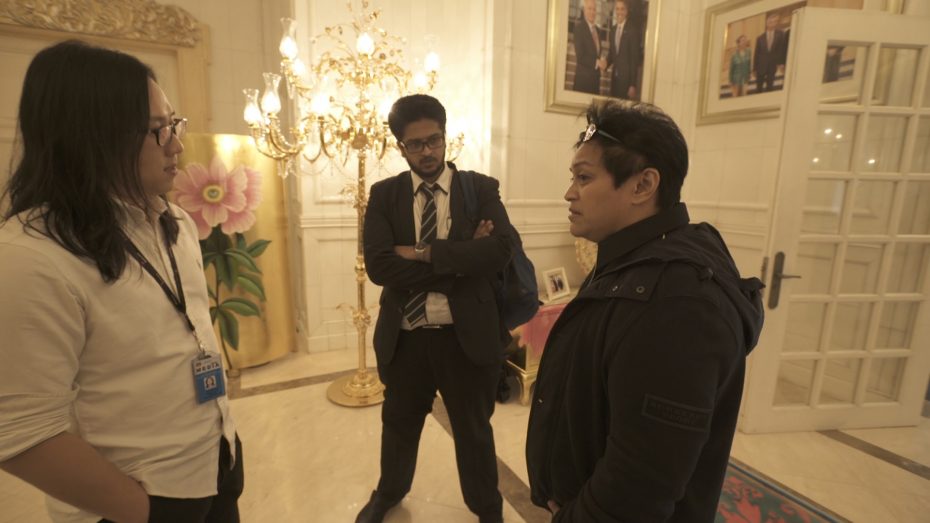 R.AGE editor Ian Yee (left) speaking to Azalina about the campaign after the meeting at Seri Perdana, Putrajaya.

Rosmah said the event is a chance for the public to tell the government what needs to be done to end child sexual crimes.

“Children are assets to our nation, and we should do everything we can to protect them,” said Rosmah. “This is an issue that’s above politics, above race, and above religion.”

D11 principal assistant director ACP Ong Chin Lan has been tirelessly fighting child sexual crimes for much of her professional career, and she couldn’t be more pleased to see the kind of action being promised by the various parties at the meeting.

“I’ve been working for the past 16 years on sexual abuse against children and women, and I’m glad that this time, all the ministries and agencies, including the top levels of the Malaysian Government, have come together,” said Ong. But it’s not just government ministries, agencies and MPs who are joining forces. Since Predator was launched in June last year, tens of thousands of concerned citizens have signed pledges to help end child sexual crimes.

A number of celebrities have also volunteered to be ambassadors for the Predator campaign, and some of them will be at the March 13-14 seminar to moderate the breakout sessions.

Lisa and TV personality Daphne Iking were the first to confirm their participation, and they’re confident many others will want to do their part as well.

Clearly, Malaysia is taking child sexual crimes seriously. To join the movement, go to fb.com/ragepmp, where our Predator team will keep you updated. R.AGE speaks to director and executive producer Justin Ong about his new documentary on paedophilia in Malaysia. The journey for laws against child sexual grooming

We’ve come a long way in the fight to address child sexual crimes, since the launch of the MPs Against Predators campaign. BACK TO PREDATOR HOMEPAGE
Help us build our stories by talking with us on these platforms: