HOARDES of budding photographers lining the sides of the mat, hundreds of curious onlookers checking out the action and judges scrutinising every second of the teams’ routines – the National Youth Day (NYD) Cheerleading Competition had all the right ingredients to give teams a taste of what to expect at Cheer 2012.

Organised by the Cheerleading Association and Registrar of Malaysia (CHARM) in Putrajaya last Saturday, the competition was the perfect opportunity for teams – especially the newer ones – to warm-up ahead of Cheer, Malaysia’s premier secondary school cheerleading competition.

The NYD Cheerleading Competition is, of course, a big prize in itself.

After all, most of the “big guns” were participating, including the Dynamitez from SMK Damansara Jaya, Petaling Jaya and last year’s runner-ups Rayvens from SM Sri KL. Dynamitez from SMK Damansara Jaya in action during the competition.

Last year’s winners, Cyrens, also from SM Sri KL, had to pull out at the last minute due to a team member’s injury.

Teams like the Calyx All-Girls from SMJK Katholik, Petaling Jaya, perform regularly during school events; but for team captain Joohijit Kaur, 17, it’s nothing compared to performing in a high profile competition.

“There are a lot of new members in the team,” she added.

“Taking part in the competition would help them gain some experience before Cheer 2012.”

The team has been training for the past year, since the end of Cheer 2011, and last Saturday’s competition was the perfect opportunity for them to try out their painstakingly constructed routines, which they executed perfectly to bag the runners-up spot and RM1,000 in prize money.

In the end, the champions trophy went to the Rayvens.

“We are super happy. This is totally unexpected!” said team captain Saw Li Jing, who is only 15 years old.

The prizes for the top three were presented by Home Minister Dato’ Seri Hishammuddin Tun Hussein, who incidentally played an important role in the first Cheer competition as he was the Youth and Sports Minister at the time.

The competition’s head judge Clint Johnson is no stranger to Cheer either.

He judged Cheer 2011, and had some advice for the teams this year: “The judges are looking for clean routines.

There was one team that didn’t perform any particularly difficult stunts but scored highly because they executed their moves well.”

He also added: “By competing in this competition teams can get a feel of the conditions they will face in Cheer 2012. That way they will be more confident on the big day itself.”

* Cheer 2012 is organised by R.AGE and Galaxie, co-presented by Silkygirl and co-sponsored by Sugus.

The Cheer 2012 finals will be held on June 16 and 17 at Stadium Malawati, Shah Alam, Selangor. 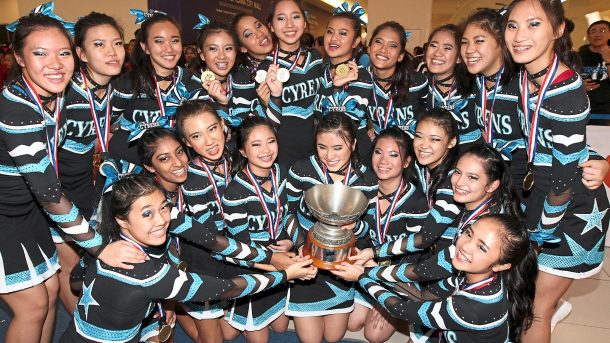