IN front of the live audience, the R.AGE Food Fight finalists were chatty, cheerful and poised as they presented their original palm oil recipes at the competition’s grand finale.

But back in the kitchen, things couldn’t be more different as the finalists cooked their hearts out to make sure their dishes would blow away the illustrious panel of judges.

The nerves were completely understandable. With RM10,000, a food show on R.AGE and a food column in The Star at stake, it was no surprise everyone was in it to win it. Kuek preparing her very complex dessert dish, which had palm oil incorporated into almost every component. — Photos by: The Spacemen

But there could only be one R.AGE Food Fight champion, and that honour went to Nurilkarim Razha, a Penang-based restaurant manager who brilliantly incorporated palm oil throughout his delicious recipe – baked fish with prawn otak-otak, ulam pesto and paku salad.

It wasn’t easy, though. The cook-off in the world-class kitchens of Le Cordon Bleu Malaysia was just half of the equation. The finalists also had to present their dishes in front of our cameras and a live audience.

After that came the ultimate test – they had to serve their dishes to the judges, which included a certain Chef Wan, and we all know he never minces his words.

Chef Wan had warned the finalists at an exclusive masterclass the week before how difficult cooking for a live audience could be, and finalist Li-Anne Kuek, a food stylist and home baker, experienced it first-hand at the finale.

She was making a pretty complex dessert – pumpkin walnut loaf with white chocolate ganache, milk crumble, honeycomb and yoghurt sorbet. Unfortunately, the sorbet turned a bit too solid in the fridge as she waited her turn to present it to the audience.

But Kuek kept her composure and told the audience the story of how she learnt to quenelle ice-cream from Chef Onno as she painstakingly carved the sorbet from her bowl.

“I liked how you stayed calm when your sorbet was too frozen to quenelle,” said Tan. “If you want a career in TV that’s what you need because things can go wrong.” Chef Wan and the R.AGE Food Fight judges enjoying one of the finalists’ presentations.

Despite the high stakes, the camaraderie between the contestants was evident. Nurilkarim even got last-minute hairstyling help from Kuek and fellow finalist Kelly Siew before facing the judges. Like a true champ, he never lost his good humour, despite feeling the pressure during his presentation.

“I had to look calm and friendly in front of all the lights and cameras. That involves more than just cooking, so it was a challenge for me,” he said.

The judges’ tasting and feedback session was probably the most stressful part of the competition, as it was make or break for the finalists, and Nurilkarim received rave reviews for his dish and presentation style.

“I like the way you projected yourself,” said Chef Wan. “You have a good future in TV if you continue this way and improve. You did very well.”

First runner-up Ahong Yeang came in a very close second, having delivered a hilarious presentation along with an amazing dish of roast chicken in coconut gravy with a chicken skin crisp.

Judge Darren Chin, owner of the highly-rated DC Restaurant, said the hearty dish was a perfect representation of Yeang’s larger-than-life personality. “This dish has a lot of robust flavours and honesty, which I think really reflects who you are.” Yeang gave a hilarious presentation in front of the judges and live audience while putting together his roast chicken and coconut gravy dish.

While it’s pretty clear all five finalists had some star quality and will now go on to bigger things, there could only be one Food Fight champion.

Nevertheless, Chef Wan feels the competition is a great platform to promote young Malaysian talent in the culinary world.

“We have so many skillful, talented young people in Malaysia who are passionate about food, and this competition gives them a stage to showcase their talents.”

And now, what’s next?

Now that the drama and excitement of the R.AGE Food Fight finale is over, the five finalists are working on taking their careers to the next level.
Here’s what some of them plan on doing:

“I’m looking to expand my food business. At Grub (Yeang’s restaurant in Petaling Jaya), I’m dealing mainly with the lunch crowd, but I want to open another restaurant to serve food that I’ve always wanted to do.” — Ahong Yeang

“I used to run a supper club, but I’ve been so busy with other projects this year that I’ve been neglecting it. I’ve given myself some sort of a resolution to restart the supper club and to come out with more recipes to share with others.” — Kelly Siew

“I started a cake business a few months back, and I also hope to start a catering service as a side business. I’ll also continue making videos after picking up video hosting skills from Food Fight and learning how exciting it really is.” — Ashley Pan

“I want to keep my blog updated and upload my own cooking vidoes whenever I can. The 15-minute finale presentation was my favourite part of the entire competition, and I would love to work on my presentation skills to succeed as a cooking show host.” — Li-Anne Kuek

“My dream is to own a few restaurants and a hotel. I love the experience of giving people good service, whether to local or foreign tourists. I’m looking to expand my business to Kuala Lumpur, whether by expanding the Jawi house brand or something new entirely, like modern Malaysian cuisine, which is what I cooked at the finals.” — Nurilkarim Razha 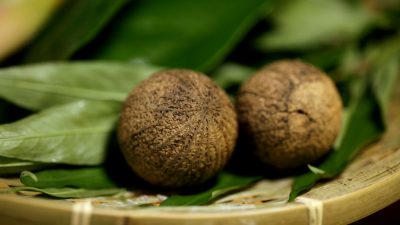 Our R.AGE Food Fight champion and new columnist Nurilkarim Razha explains how sambal is the most versatile Malaysian condiment! It was the end of the 2015 R.AGE Food Fight campaign, but the beginning of a new food journey for winner Nurilkarim Razha from Penang.